One of the difficult things about being an Ethical Vegan is that we try to avoid animal products and bi-products to the best of our abilities. As you all know, being an ethical Vegan is more than just eating an animal free diet. That people like the CEO of Whole Foods or Bill Clinton (or even Michelle Pfeiffer) call themselves Vegan is irrelevant. The point is that they are not! Veganism is about refusing animal exploitation as much as possible. We reject the Carnist ideology which objectify non-humans animals as things we can eat, wear or use for entertainment.

The challenge of Vegans in getting cruelty free products is nothing new. But there is light at the end of the tunnel. So far, a lot of us had to rely on Farmer’s Markets, regular Grocery stores or Whole Foods for our food and other household products. However, unvariably, we have to pass by the aisle where animal carcasses or their excretions are displayed in glorious admission that Carnism is alive and well. The CEO of Whole Foods calls himself a Vegan. I don’t know where he got his definition of Veganism but he obviously got a different definition than most of us. Veganism is an ethical stance. I would never call myself a Vegan and keep selling the tortured flesh of sentient beings just because I want to make a buck! That is no Veganism. That is a travesty.

Viva La Vegan in Rancho Cucamonga, CA is different because VLV is a 100% grocery store. They have been in business for a year already! I had no idea they existed. I also wish they were closer. The staff is friendly. The co-owner Arlo Toews, a strongly commited ethical Vegan, will have you try lots of goodies on demand, and the store is growing as a new wing just got added! For those who think Vegans have barely enough to subsist on, think again! This place has so much stuff! I never knew there were so many purely Vegan products on the market. That was a revelation. And for bonus points, they carry things that Whole Foods ignore (probably because they reserve the space for animal carcasses to satisfy the omnivores and the boss’ salary). How dare Whole Foods pretend to be humane friendly. They are the largest purchaser of animal flesh in the country. Viva La Vegan Grocery Store actually proves that people can have a 100% Vegan business without sacrificing their ethics!

Well Done VLV! Please note that Bob Linden of Go Vegan Radio was there to do his show as well. Check out their website at Vivalavegangrocery.com and also Bob’s website at GoVeganRadio.com 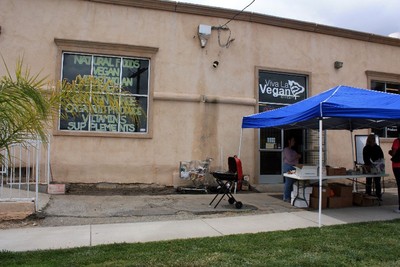 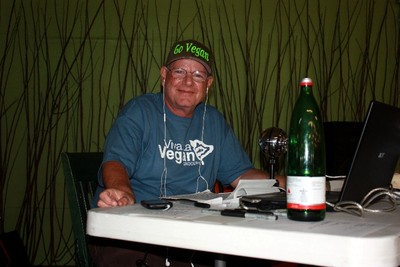 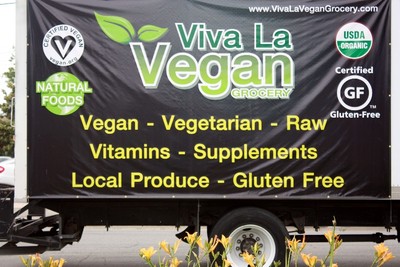