There has been a lot of discussion in the press about the consequences of Sandy on the country and the issue of Global Climate Change. Interestingly enough, the conservative mainstream media outlets are finally daring to use the words “Global Warming”. I was wondering all these months of crazy weather when someone would start to wake up. But is it a wakeup call?

I have read a number of articles from the mainstream press regarding the cause and effects of Global Warming. Not once did I see mention of what is called the proverbial “elephant in the room” of climate change: our meat, dairy and egg consumption. We now know from both the United Nation’s report “Livestock’s Long Shadow” and the WorldWatch Institute’s own report that the main cause of climate change is the type of food we consume. According to the UN report, it contributes a (conservative) 19% of greenhouse emissions but the WorldWatch institute goes as far as 51% of greenhouse emissions in their own reports as they include more externalities the UN report left out. To say that this is an inconvenient truth to the mainstream media and even the environmental movement is an understatement. What does the environment movement say to people? The usual: change your light bulbs, buy a hybrid car and recycle. It does not tell people what they really need to change: their fundamental relationship to food.

I followed Dr. Jill Stein, Presidential Candidate for the Green Party, as she brought fruits and vegetables to the people who have been blocking the Keystone Pipeline for over a month and how she got arrested. I felt a ray of hope: a candidate willing to get arrested who brings Fruits and Vegetables, not animal flesh to help them. What a symbol! 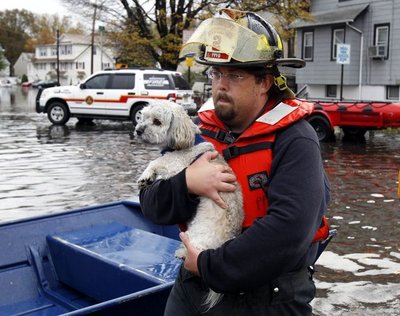 In the meantime, with only a few days left to the election, we are stuck with two false choices. On the one hand a President who pretends to be doing something for the environment and his presence at helping with rescue efforts after Sandy certainly helps making him look good as he is apparently pro-FEMA. But let’s not forget that he let TransCanada starts running its pipeline through the country, that he is for the so-call “clean coal” and has never addressed the real issue of our climate dilemma: our food habits and the big agribusinesses and USDA who determine our food supply. The USDA, after all, thinks ketchup is considered a vegetable (sic!). On the right, we have… well Mitt Romney. Do I need to even go there? These two candidates are one and the same, two sides of the same coin who just pretend to be opposed. But they are paid by the same people, the ones in the shadows, who really run the show: Big Corporations (which includes, the Industrial Military Complex, the Big Pharma industry, Big Oil and of course Big Agribusiness). So, who are they gonna work for? Who are they paid for? As Michael Moore would say, “Who’s Your Daddy?” It’s not us, the 99%, it’s not the planet and certainly not the biggest victims of it all: non-human animals.

What are the solutions? (If any). Grassroots movements have always changed politics from the bottom up, not the bottom down.  The Women’s movement made it possible for women to vote, the Anti-Slavery movement (who was NOT for “better conditions for slaves” aka welfare as it is done for animals) eventually won by being uncompromising. The Environmental movement should do the same as well as the Animal Rights movement. This is all part of the same thing. These are continuing struggles. Just because women have more equality, doesn’t mean that they are not attacked by extremists (mostly white old males) who want to tell them how to “run” their bodies (they probably think a woman’s body is like running a business). Just because slavery is illegal doesn’t mean it has disappeared. There is in fact more slavery in the world now than even before (sweatshops anyone?). Just because groups like the Humane Society of the United States “win” so-called welfare victories (which they are not) doesn’t mean animals are better off. (It is far from it since they are putting themselves in bed with the animal abusers. It would be like the jews working with the Nazis for better food and conditions.) And because Obama has put money into green programs like solar and wind doesn’t make him an environmental president, far from it.

As long as we ‘other’ the animals and the Earth (to quote the brilliant Colleen Patrick-Goudreau), and thereby separate their fate from ours, we can’t have peace and harmony on this planet. As long as we nurture the selfish attitude of the ‘other’ as being owned by us, we are not free. Freedom, peace and harmony come only with detachment (detachment is not disinterest), respect and love as well as an understanding that everything is here for his or her own reasons.

So in the next few days, if you are voting, don’t vote for the lesser of two evils, vote with your conscience. But remember that this is a drop in the ocean of what can be done. Whoever is elected can only make change if there is a mass movement to demand these changes. Our part as Vegans is to help people connect the dots between the environmental problems and our exploitation of animals. The two are intrinsically linked. Go out there, spread the Vegan message of inclusion. The more of us, the bigger the changes or God helps us all.