On May 2003, following the US troops invasion of Baghdad, the Iraq’s seed bank located in Abu Ghraib, was destroyed. In its place, the US forces led by Paul Bremer forced Iraqi farmers to accept US genetically modified seeds and turned Iraq into a giant experiment for the biotech industry. The occupation of this country has been used as an excuse to remold Iraqi Agriculture to fit American agribusinesses interests and the free trade ideology.

There is no regulation on these « foods » because the government agencies which could have regulated this new technology were deregulated at the start of the 80’s by Reagan and the following administrations. The birthplace of biotechnology is Hawaii. The Hawaiian story is symptomatic of what’s happening around the world. The GMO papayas in Hawaii contaminated up to 50% of the non GMO papayas. And just like with other GMO crops didn’t contribute to the local economies but made them worse contrary to what the biotech industry would have us believe.

The author sums up the GMO industry very well when she says: « The problem is GMO manufacturers are a chemical industry posing as agriculture. they say they are about creating life. Their advertisements always show happy faces and healthy plants. But what they’re really about is death, the poisoning of weeds and insects. » The real scary part about transplanting genes, besides contamination, is the kind of « mutant » crops they « create »: corn with jellyfish genes, human genes in tobacco, sugar cane and rice, wheat genes in chicken. Shouldn’t we reject this as a violation of the natural order and therefore consider this immoral? Claire Hope Cummings does in fact make a case against it and then goes into an historical account of the way native societies (from Polynesian to Native American) have delt with nature and showed reverence for it in stark contrast with our western ways.

But it gets better! The FDA wants to approved transgenic fish, which will kill up to 60,000 wild fishes over 40 generations (which is not long in a fish lifetime). And what about Monsanto? This company has so much blood on its hands with Agent Orange in Vietnam, you would think it had enough. But no, it gives hormones to cows and it loves to sue small farmers over so called crop contamination. Monsanto has been seen as the devil over the years for the way it consolidates and dominates the seed industry, suing and ruining small farmers to enforce its patents and therefore to CONTROL THE FOOD SUPPLY. I personally hate Monsanto. Ok, it’s not exactly an objective review but I defy anyone to find me anything remotely good about this company.

The other scary part of the problem with GMO technology is worrying me even more is that « now, just four multinational agrochemical corporations decide what plants are grown, what foods and drugs are produced, and what price will be paid for many of life’s basic necessities. The corporations are strengthening their grip on all aspects of the food system. Genetic Engineering and its patented products are both a tool for accomplishing this control and an end in themselves. Companies want market control; governments want political control. Either way, when these organizations exert top-down control over the food supply, ordinary people no longer have a say over what they eat. Since seeds are the first link in the food chain, when they are owned by a few multinational corporations, those corporations, and not the citizens of the world, will decide the future of food. »

Despite all the gloom in this book, the author offers some home by showing us that there is a growing grassroots movement towards sustainable, organic and more humane agriculture. People are organizing more and more and are rejecting the models imposed by the corporate elite. I am very hopeful and convinced that the future of our food will have to take a turn for the better as the alternative is too dire to imagine. This book is an excellent complement to the books by Jeffrey Smith whom « Seeds of Deception » I have reviewed previously (see several pages earlier). 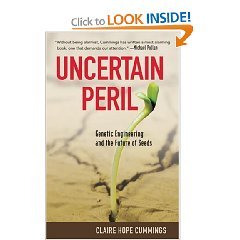