If you don’t know who Greg Palast is yet, maybe it’s time you read one of his books. Greg Palast is the man who blew the whistle on the voter purge in Florida in 2000 and reported it on BBC TV since the US Corporate media would not touch it.

In this updated version of his bestseller, not only does he go into details about the obviously stolen elections of 2000 and 2004, he also issues a big warning about the 2008 election and how the GOP is going to try to steal it again. If you want to know the tactics, Greg Palast gives you an impressive list of facts on the 2000 and 2004 fraudulent election tactics against minority voters and he talks extensively about the « class wars » on the American people used by the rich class to disenfranchise the poor voters.This book is downright scary but we all know now that it is true. It reads like a Mickey Spilane thriller where the detective shows you his clues and facts on the bad guys in the White House and the ones who helped them get there.

He also talks about Katrina and how the Bush administration shamelessly refused help from Venezuelan president Hugo Chavez and the privatization of FEMA. He shows how low this administration will go to continue its class war against the poor.

But Greg Palast also offers ways to fight back and that is the reason that, after so many questions from readers, he added a new chapter to his book. This book will enrage you, amuse you (funny at times) and if it doesn’t awaken the activist in you, nothing will. Highly recommended! 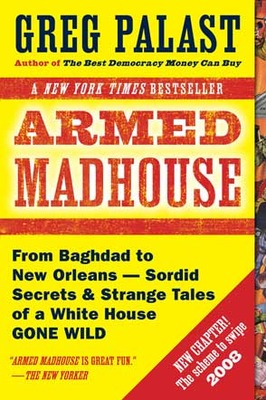